Skip to main content
You are here: Home1 / News2 / Hana Ali3 / Valedictorian: Grateful for the Experience of Having Failed

Hana Ali is a Johnson Take Stock Program participant graduating this spring as Valedictorian of Lake Worth Community High School. On her way to attending the University of Florida, she’s picked up numerous scholarships, including awards from the Community Foundation for Palm Beach and Martin Counties, the Women’s Chamber of Commerce, Teamwork USA, and the Machen Florida Opportunity Scholars. She wrote this personal statement as part of the Johnson Take Stock Program.

I slid down so far that my legs were not even on the chair anymore. My heart pounded wildly. The minute hand moved at the pace of a snail. I was in science class, and I was in shock. I had just failed my assessment. I could barely comprehend the idea of failing because I had always done well in school. Growing up in my Caribbean household, academic success was a necessity so I could go to college, which is something my parents had not been able to do. At first, I felt that failure was a catastrophe that would hurt my parents and meant I was not cut-out for a career as a physician. I was going to throw it all away. 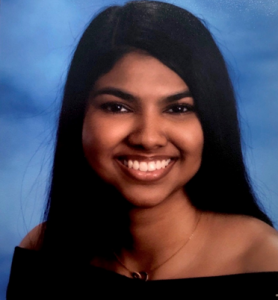 My parents always instilled in me and my siblings that although we did not have a lot, there were always others going through worse than us. Giving back was necessary to balance our blessings. When I was young, my mother took me to volunteer at local food drives. I loved the feeling of helping people and knew I wanted to continue doing it as I grew up. I wanted to go to medical school to be a physician, but this failure started to make me question my capability. My self-confidence plummeted and I began to reassess my career path. I kept thinking that failure was like an eternal red light, but it was actually just a stop sign, a momentary setback that would ultimately push me to try harder and gain confidence in myself.

My drive to be a physician was enough to motivate me to do everything I could to recover my grade in science and find ways to prevent such a failure in the future. Over the next three years, I became a sponge and absorbed as much information during class as I could. Instead of counting the seconds until class would be over, I paid attention, took notes, and stayed engaged. I began to see my work pay off and did dramatically better. I regained my confidence and motivation, and with my renewed drive, started seeking more opportunities: I started volunteering at a local hospital.

On my first day, I delivered a dozen bubblegum pink Minnie Mouse balloons to a little girl in the pediatric ward who was having surgery that afternoon. As I entered the girl’s room, her eyes instantly lit up. She was so excited by the balloons that her surgery felt less significant to her. I imagined how much more rewarding it would be to be her doctor and build a rapport with her while also helping to keep her healthy. During this volunteering experience, I discovered I wanted to specialize in pediatrics and was so grateful I did not give up on my aspiration because of one failure.

Her smile solidified all that I had been working towards after that first failed assessment. It gave me flashbacks to my childhood, giving out food with my mom and the happiness I felt helping others. I realized the failure was just a bump in the road and that I could become a physician if I did not allow failures to discourage me. Without having failed and recovered, I would not have the kind of resilience and self-efficacy I have today, and I would never get to be the great and caring physician I know I will become. My new outlook will give me the confidence to overcome life’s obstacles, so looking back, I am grateful for the experience of having failed.