Skip to main content
You are here: Home1 / News2 / stigma

Middle school is often a time of exploring and expressing one’s individuality and autonomy. However, peers, teachers, and families begin playing a pivotal role in identity development. For students who learn differently, social pressures are often compounded by a sense of isolation resulting from stigma. The stigma surrounding learning disabilities and attention disorders can keep many students from seeking the tools they need to be successful.

Ryan, a current high schooler at AIM Academy, recounted his middle school struggles with ADHD. He found it impossible to keep up.

“It was in fourth-grade that I realized that something wasn’t right,” Ryan shared. “I would get assignments, and I would just leave them for weeks because I didn’t understand and I didn’t want to go ask my teachers for help.”

Even though his grades were slipping dramatically, Ryan was still too embarrassed to ask for help. Ryan’s uneasiness about reaching out came from misconceptions that students who learn differently are often confronted with.

When Ryan entered AIM Academy, he discovered Eye to Eye – a mentoring program working to eliminate the stigma of learning disabilities and attention disorders by reframing and celebrating them instead as learning differences. The program pairs students who learn differently in middle school with their high school and college-aged counterparts. Ryan was hesitant to join.

“I was like, ‘I can’t do that,’ because for some reason I couldn’t see myself impacting kids’ lives.” Despite his doubts, Ryan gave mentoring a shot.

“A lot of the kids that I would mentor suffered bullying because of their [learning disabilities] and ADHD. They were bullied a lot for the fact that they didn’t learn like everybody else, that they couldn’t interact the same way, and that they couldn’t impact the classroom and the atmosphere that’s in that classroom.”

He decided to share his own story with the mentees and become a shoulder for them to lean on.

“I wasn’t able to see it at first, but every time they’d see me the next week they’d say two words: ‘thank you.’ I would think, ‘Thank you? I didn’t do anything,'” he said, recalling his surprise at their gratitude.

However, his school chapter advisor assured him the difference he made was immeasurable. For children and adults who learn differently, the path towards self-acceptance starts with breaking stigma at the individual level. Once someone knows they are in the company of another person who learns differently, they can begin to break down their self-stigma and share their own experiences with others. And when someone shares their story, they become empowered. Empowered individuals inspire positive feedback, and that feedback fosters a supportive community.

Ryan admitted, “When that kid just kept saying thank you, I found myself going home and crying because there is a greater community even outside of the one that we have at Eye to Eye.”

This month, Eye to Eye is celebrating “Strike Out Stigmonth.” The month-long friendly competition between Eye to Eye chapters nationwide is designed to spread awareness, strengthen bonds between mentors and mentees, and connect participants to the local and national Eye to Eye community of supporters and allies. Follow Eye to Eye on Facebook, Instagram or Twitter to view the stigma-busting competition. To learn more about Eye to Eye, please visit www.eyetoeyenational.org.

David Flink is a social movement leader on the front lines of the learning rights movement. He imagines a world where one day all learners will be seen, heard and valued. Being diagnosed with dyslexia and ADHD at a young age, he later committed his life to students with learning differences. He serves as Founder and Chief Empowerment Officer of Eye to Eye. 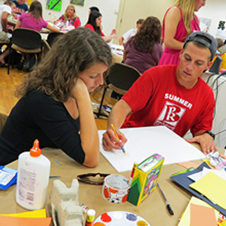 Among the challenges in contemporary education is the fight against stigma aimed at the 1 in 5 who learn differently. Stigma in education can keep a child struggling. However, we all have the tools to make a difference. The 1 in 5 who learn differently can be among the most powerful voices in fighting stigma, and in bringing along the 4 in 5 as well, changing the trajectory of all learners.

When you tell your story to others, you are no longer alone. You have an amazing community at your side. Something that was once faceless now has a face. Something that was invisible is now visible. Storytelling is one of the most empowering tools in the fight against stigma.

If you have a story to tell about learning differences—whether it’s your own life story or the story of a loved one—make a point of sharing it. All it takes is 2 minutes. Here are some pointers to consider in your daily acts of challenging stigma. 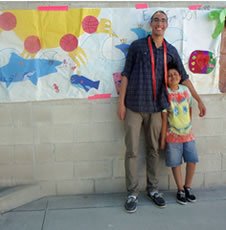 1) Bust common myths. Learning disabilities like ADHD or dyslexia have absolutely nothing to do with native intelligence. Pervasive myths about learning disability—myths that keep kids struggling in the back of a classroom in silence—need to be broken. Don’t be afraid to confront stigma when you see it.

2) Invite people in. Once someone knows they are in the company of different learners, they can comfortably and purposefully address their individual challenges in community. The more we share, the more everyone will know about the 1 and 5 among us. Stigma hates company, so let’s bring everybody in on the conversation. 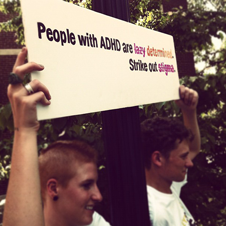 3) Language counts. The flames of every movement are sparked by the unacceptability of certain language. We all know deeply hurtful words that were once, sadly, commonplace. A piece of providing a successful education for all students is gaining fluency in the language of learning and attention issues. When we tell our authentic stories of the lived experience of LD / ADHD, we will change the language. Phrases like “ADD moment,”  “I’m numbers dyslexic” and “People with learning disabilities are just lazy” will be a thing of the past.

4) Highlight success. Hollywood directors, senators, arctic explorers, self-made millionaires—some of the most prominent and daring people out there have succeeded with a learning disability at their side. Scott Kelly, the first astronaut to spend a year in space, recently released an interview about his struggles with attention issues as a kid. There are countless examples of adults who have succeeded not in spite of their learning styles, but because of them! 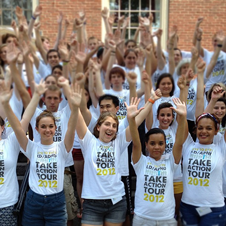 5) Become an ally. Teachers, parents, scoutmasters, firefighters, school guidance counselors, soccer coaches, software developers, librarians. These are all potential allies and advocates. In fact, 1 in 5 are likely to have a learning or attention issue themselves!

You might be or become “LD /ADHD and Proud to Be.”

You or a loved one might have an undiagnosed learning difference.

No matter who you are, our community is never more than one voice, one face, one mind away. Share your story, listen to a story. With stories we build community, and in community, stigma has no place.