Skip to main content
You are here: Home1 / News2 / Certified Teacher of the Visually Impaired

Tag Archive for: Certified Teacher of the Visually Impaired

Imagine as a parent of a child with low vision being told there’s no teacher available to provide those vital early intervention lessons. Imagine being told your child would have to be added to the wait list until a teacher was available.

The nation faces a severe shortage of Teachers for the Visually Impaired, and the U.S. Department of Education has identified it as a key teacher shortage area. The same is true in western New York where VIA (Visually Impaired Advancement) serves students with low vision or blindness from 40 area school districts.

We knew that the direct link to providing services to more students was fast-tracking a new Certified Teacher of the Visually Impaired. Thanks to a grant from the Johnson Scholarship Foundation, VIA has made that happen.

To find the right candidate, we had to go no further than our pre-school program where Amy Lindstrom had taught since 2012. 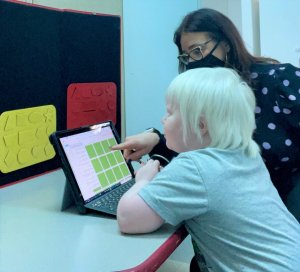 “That’s where my love for the role of a TVI had begun,” Amy said. “I began in 2012 as an aide, then as a special education teacher. I did have students with visual impairment in my classroom, who also were receiving services from a TVI. It was through the grant that I was able to go pick up classes and complete the courses that I needed. I’m happy to say that I did receive my certificate at Thanksgiving this year.”

Amy already held a master’s degree in special education, so she needed only complete the certification program and pass New York’s state exam to obtain her TVI certification. Now, she’s one of two full-time and three part-time TVIs at VIA serving students from birth to age 21 throughout 40 regional school districts in Western New York.

Her days involve travel to schools, homes and day care centers to provide individualized therapy to children who are visually impaired. She’s working with 13 school-age, six pre-school, and two early-intervention children. Expanding the number of individuals VIA serves not only assists those individuals but others as well because it provides additional dollars to supplement other VIA services for people who are blind or visually impaired.

For parents whose children otherwise might have been waitlisted, it means their education stays on track. 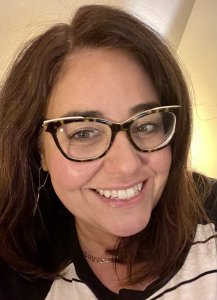 “We know that children who are blind really miss out on what we refer to as ‘incidental learning,’” Amy said. “This is all that we learn just by taking in the world around us, primarily through what we see. The children we serve need explicit instruction to develop concepts and an understanding of the world around them. They often fall behind their peers developmentally due to their vision impairment. This explicit instruction by a TVI becomes vitally important to filling in the gaps that put our students behind.

“Completing my TVI training and passing my New York State Blind and Visually Impaired State Exam has been an amazing experience for me,” she added. “Thank you to the Johnson Scholarship Foundation for making this happen.”

Renee DiFlavio is Senior Vice President at VIA.