In 1988, Nova Scotia first recognized Black History Month. Thirty years later the tradition continues with African Heritage Month being recognized and celebrated in communities, by organizations and in our postsecondary institutions across the province.

On Feb. 1, Dalhousie University launched a month of events with the raising of the Pan-African (or Marcus Garvey) flag to reflect and honour this year’s theme of “BLACK EXCELLENCE: COMMUNITY TO ACADEMIA.”

Promoting Leadership in health for African Nova Scotians (PLANS) was recognized for its dedication and contribution to the success of Black students in health, among other pioneering pathway programs such as Dalhousie’s Transition Year Program, Indigenous Black & Mi’kmaq Initiative (in law school), Black Educators Association’s Math Camp and Imhotep’s Legacy Academy. 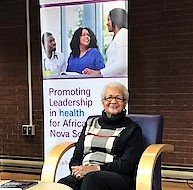 In keeping with the theme of Black Excellence, PLANS joined the Africentric Learning Institute and the Health Association of African Canadians in welcoming Dr. Clotilda Yakimchuk to share her story to the community and aspiring nurses as one of Nova Scotia’s first Black nurses.

Dr. Yakimchuk shared stories of her journey – from failing grade seven and taking that as a lesson to work hard, facing racism and standing strong as patients refused to be cared by a Black woman, and being elected the first Black president of the Registered Nurses Association in Nova Scotia in its 100-year history.  During her training, Dr. Yakimchuk did not see many others that looked like her, but was pleased to hear that more students of African descent are considering the nursing profession – one she enjoyed very much.  It was a pleasure to sit with Dr. Yakimchuk and she is an inspiration to all.

To close the month, PLANS is supporting Black health events with the student-led groups: Atlantic Association of Aspiring Black Physicians, Community of Black Students in Nursing, and Health Association of African Canadian-Student Organization as they aim to educate, build community and strive for excellence within themselves.

PLANS is now recruiting youth for its summer programming which has grown with support from the Johnson Scholarship Foundation. In its fifth year, the African Nova Scotian Health Science Summer Camp will see students from across Nova Scotia learn more about postsecondary options, health careers and meet new friends as the camps are held at three Nova Scotian universities.

Michelle Patrick is the program manager for Promoting Leadership in Health for African Nova Scotians (PLANS) – supporting people of African descent on their journey to education and a career in health. Her favorite PLANS program is the African Nova Scotian Health Science Summer Camp that has expanded to more institutions across Nova Scotia and is reaching an increasing number of youth. She is a community volunteer with the Health Association of African Canadians and the Community Health Board.