Skip to main content
You are here: Home1 / News2 / Nathan Chau3 / Racing to Your Life Calling

One of my fondest memories as a child was career day in elementary school. On that day, everyone dressed up like the person they wanted to be like when they grew up. I remember one year I wanted to be a NASCAR driver. My mother dressed me up in a race suit and a cardboard box that she managed to make look like a race car. We then had the opportunity to go out to the bus parking lot to meet the people we wanted to be later in life.

When I arrived at Palm Beach Atlantic University (PBA) as a transfer student, I had come a long way from wanting to be a NASCAR driver. I had my sights on becoming a youth pastor. However, I had no idea that was about to change, thanks to some people with a special heart for helping others.

Johnson Scholarship Foundation creators Theodore R. Johnson and his wife, Vivian Chesley Macleod Johnson, recognized the importance of helping people who were less fortunate, and so did PBA’s founders. One of PBA’s longest running traditions is Workship. This term was created by Doris Moody, the wife of PBA’s founding President Dr. Jess Moody. The Moodys believed that students who have been called to PBA were also called to be servant leaders in their community. Doris had combined the words “work” and “worship” because she saw the volunteer work in our community as a form of worship to the Lord. As a faith-based institution, PBA believes that one of God’s commandments is to serve and love others. Students learn how to respond to the needs in the community. Today, as the director of Workship, I have an opportunity to help students use their volunteerism as a way to discover their life-callings. 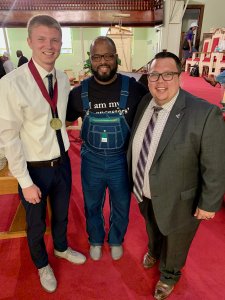 Johnson Scholar Judson Crawford was one student I had the pleasure of mentoring through the Workship program. He came to West Palm Beach from rural Georgia to study psychology, and the Johnson Scholarship helped make his PBA education possible. He quickly became involved with the Rosemary Village Afterschool Program in partnership with The Tabernacle Church. Through this program, Judson worked with inner-city youth. He helped them with homework and taught them important life lessons. The children who participated looked up to Judson as an older brother. He was the strong and positive male figure that so many of the children were missing in their lives. Judson saw the positive impact that he had with the children.

As an educational institution, PBA shares the Johnson Scholarship Foundation’s conviction that education is the best means to empower people. Judson’s PBA education in psychology empowered him to empower the families served by the Rosemary Village Afterschool Program. Because of his education, Judson understood why the children acted the way they did, and he communicated more effectively with them and their parents. In 2018, the Newman Civic Fellowship recognized Judson for his work with the Rosemary program, naming him a member of the 2018-2019 cohort. Judson’s volunteer work and psychology studies eventually led him to a career in law enforcement. Graduating in 2019, Judson landed a spot with the St. Johns County Sheriff’s Office.

It is stories like Judson’s that inspire me in my work. When I arrived at PBA in 2011, I thought I would be on a church staff after graduation. Instead, I discovered that student ministry could be done as a teacher, mentor, or even working alongside volunteers. I fell in love with PBA and did not want to leave when I graduated in 2013. When the opportunity arose to work with the Workship community service program, I took it! Here I am, over eight years later, loving every moment of what I get to do for the students and my community.

When students step foot on campus, we want them to dream and explore their interests. Our hope is that they discover their life-calling through their experiences and are recognized for their hard work. Judson was one of many Johnson Scholars at PBA who discovered his dream career through his community service.