National Disability Employment Awareness Month (NDEAM) is observed each October. The theme this year is “#InclusionWorks.” In honor of NDEAM, Giving Matters will devote 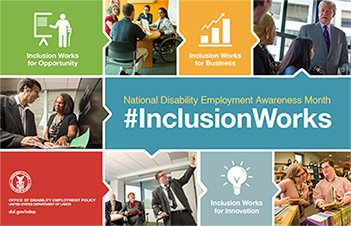 sm and job turnover.
The Foundation began to include grants to non-profit organizations that focus on employment of people with disabilities and changed its mission to include employment. Recent grant agreements include Bridges from School to Work and The National Statler Center.
Bridges from School to Work engages employers, schools, community resources, youth and their families to help businesses meet their workforce needs while offering young people with disabilities the opportunity to learn, grow and succeed through employment. It presently serves about one thousand students per year from operations in 9 U.S. cities. Bridges has recently adopted a plan that would expand its locations to new cities and double the number of young people that it serves every year.
The National Statler Center for Careers in Hospitality Service is a program of the Olmsted Center for Sight in Buffalo, New York. It offers two curriculum modules: a ten week program that focuses on customer service in the hospitality industry and a seven week program on customer service for contact centers, financial and medical offices, transportation, and communications industries. Statler’s curriculum was developed in 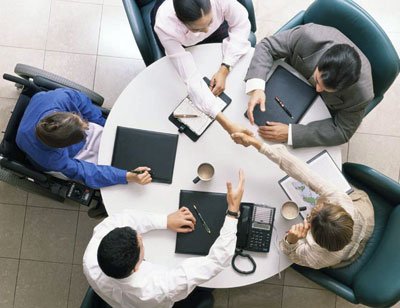 partnership with Johnson & Wales University, the world’s premier hospitality educational institution and is a New York State proprietary business school, certified by the state department of education.
Foundation grants to employment focused non-profits include Career Opportunities for Students with Disabilities, the National Organization on Disability, Abilities and Gulfstream Goodwill Industries.
We salute our grantees and former grantees and the work that they do. Thanks to their work and others like them, employment of people with disabilities is receiving more attention in recent years. The Federal Rehabilitation Act requires federal employers (this includes contractors who sell goods or services to the federal government) to take affirmative action to employ and advance in employment qualified individuals with disabilities. American businesses, large and small, have taken a public stand and increased the number of people with disabilities in their workforces.
Progress has been made but there is still much to do. Get behind this issue. Spread the word. Donate to the cause or, better yet, hire someone with a disability. You and your business will be better for it!