I am a retired “people” person who is very active with church work, children, grandchildren, photography, tennis, investments, and travel. I have been a lifelong learner and am still learning. I consider education one of the keys to success in life and the ability to help young people reach their potential as a great opportunity and privilege. In 2010 a tennis friend of mine mentioned Take Stock in Children. I asked for more information and he told me how much he enjoyed the mentoring, the successes he had in helping students prepare for college and the friends he had made. He then said, Take Stock In Children needed volunteers to be mentors for local high school students.

After learning about the great work Take Stock does in Palm Beach County and in every county all over Florida helping high potential, low income students get the resources they need to graduate from high school and go on to college, I decided to become a mentor.

My first mentee in 2010 was Jason Kerr. I was very nervous before our first meeting. Would I be able to help? Would I be able to connect, develop rapport and inspire Jason to do his best? Of course I had taken TSIC training, read their mentoring program materials for goal setting, establishing accountability, and maintaining respect. I also had met TSIC leadership and was impressed with their experience and quality. But …. would I be able to turn their plans into progress for a millennial several generations out of my era?

One of the first things I learned about Jason as we began to get to know one another was he was a huge Miami Heat fan. He was a collector of Nike tennis shoes and actually did a little online business buying and selling them at unbelievable prices. The biggest shock to me was when he told me – and he was a sophomore – that he had never cracked a book and his GPA was 2.2.

I told him about growing up in the hills of Tennessee in a house without running water or electricity, about building my self-image and confidence by studying hard and graduating valedictorian of my senior class of 136. That led to a work study scholarship to the University of Tennessee, and I dropped out after three years to join the Marine Corps. While in service I got married, and my wife and I had our first daughter. I told him everybody thought that was the end of my college career but it wasn’t. We struggled, but I went back to UT and won a Bachelor’s in Engineering and then a master’s at UF. I told Jason progress in life seldom comes in a straight line. Never give up!

In order to develop even more rapport with Jason, I began watching the Heat regularly. Each week we would discuss all the stats and prospects for the playoffs. My wife began watching too! Although she has never shown any passion for sports, she soon became a Heat fan. She is now rabid about “her” Heat, and we now watch every game. She knows all the competing teams, players, and stats far better than I.

I encouraged Jason to start studying at least an hour a night. We talked about time management and how much time could be wasted without a plan and discipline. I told him the story of my kids going to summer school and taking classes that would allow them to take AP classes or have time for extracurricular activities like band, the school paper or drama. He got an after school job at LIDS. He decided to study Nursing at Palm Beach State College. His grades started coming up. He graduated with a 2.9 GPA.

After graduation Jason enrolled in Nursing at PBSC and took a job at the Cheesecake Factory. We still get together 2-3 times a year. Jason started out as a busboy. He is a 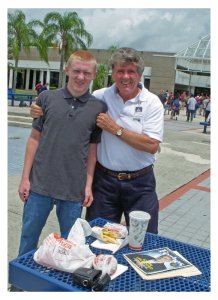 fast learner, good worker, outgoing and energetic. Before long he was given the opportunity to be a baker and learned to make all the specialty desserts. He works thirty hours a week and goes to school although at a reduced course load. The first time we met him last year for lunch he was all excited. He had bought himself a new Volkswagen. The next time last year when Jason met my wife and I for lunch he surprised us again. He brought his new girlfriend. She was cute, friendly and ambitious and also a student at PBSC. My wife and I were really impressed with how my young mentee was growing up.

A few days after Thanksgiving I got a text from Jason inviting me to lunch. He wanted to discuss investments. I was happy. I love to talk about investments and the stock market. I know what you’re thinking. The stock market is no place for a young guy starting out. But Jason had figured out that bank deposits, CDs and money market accounts paid nothing and wanted an introduction to investing. Jason had also switched to a Business Accounting major and would get his AA degree in the spring. I asked him about his girlfriend, and he said she had dumped him. Why? Because he wasn’t getting through college fast enough!

But the good news is Jason has moved up to bartender at work and learned how to make all the drinks. Like I said, success rarely comes in a straight line: he was working about 30 hours a week, not making much progress in his business program when a friend told him about Palm Beach State’s Automotive Service Technology Career Certificate Program. Jason jumped at the opportunity to take the certificate course and work at a dealership at the same time. He began to excel at the technical course work and loved the hands on part. At the dealership, they started him out doing oil changes and there was a lot of sitting around while they kept the experienced techs busy. He wasn’t too happy until he finished at PBSC and moved to another dealership and began removing and installing entire engines on warranty. He was now growing in confidence and making a decent living.

As time moved on Jason stayed busy, found a new girlfriend, fell in love, started a family and began thinking about the next step up in his career. He had his eye on a service advisor position. This would be a full-time job working with the customers and best of all it comes with a salary and benefits which a family man needs. Family man indeed! Jason and Gabby welcomed Olivia into their home in October 2021.

I contacted Jason recently.to get an update. He sounded so excited. He changed dealerships several months ago and got his service advisor position and “Olivia is getting so big!” This sounds like success to me but something tells me Jason isn’t done yet.

By the way as I write this my wife is waiting for me to come watch the Heat with her. In the meantime this 82-year-old is very happy with his 30-year-old friend who is proving that even today one can still achieve the American dream.

Mentoring is a key component of the success of every participant in the Take Stock in Children Palm Beach County Program, a grantee partner of Johnson Scholarship Foundation. Each year more than 350 mentors participate in the program. If you would like to contribute as a mentor, please contact Kimberly Briard at KBriard@takestockpalmbeach.org. 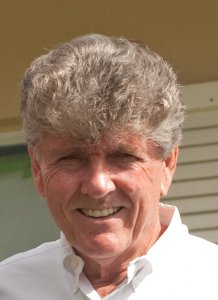