The following article was written for UCF Today News and is shared with permission. Johnson Scholarship Foundation works in partnership with the Student Accessibility Services office at UCF and all the schools in the State University System of Florida to provide scholarships to students with disabilities.

In her final semester at UCF, Alex Dixon was finally able to complete a task that most college students take for granted: reading a textbook on her own. For the graduating early childhood development and education major, walking across the stage for commencement with her peers this summer seemed like it would take a miracle a decade ago, instead of her consistent hard work.

When Dixon was 10 she caught pneumonia, which triggered a rare malfunction that caused her brain to start attacking her body. She recovered from the infection, but continued to battle pain, muscle spasms, contortions and loss of function for two years as she visited specialists around the country who could not figure out what was wrong. By the time she entered sixth grade she started to use a wheelchair. At 12, she underwent a deep brain stimulation procedure as a last hope to find a solution, but while she was anesthetized she had a stroke.

“It was incredibly frightening,” says Juli, Dixon’s mother and a professor of mathematics education at UCF since 2000. “The stroke damaged the part of her brain that was killing her, but there was quite a bit of collateral damage as well. As she was coming out of her coma, we were told she might be in a vegetative state. It’s been very slow progress over time, but she returned.” 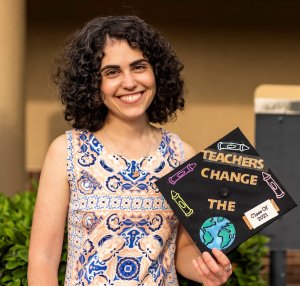 That collateral damage includes being partially paralyzed on her right side and legally blind — able to see only half of anything straight on. Before Dixon became ill, she was a happy, healthy child who took gifted classes, played piano, loved art and wanted to be a veterinarian when she grew up. After her stroke, she had to relearn every aspect of her life, from normal bodily functions and academics to who she even was. It was in that relearning process that Dixon found an interest in teaching.

“I want to work in a preschool setting with students with and without disabilities and special needs, hopefully in an inclusive setting,” Dixon says. “The first few years of life are so valuable to build a base of the education and play so kids are excited about learning and develop the positive mindset toward it that will help them persevere later on.”

With the support of her family and her own determination to improve, she slowly regained functions such as walking, talking, and completing schoolwork. Throughout middle school and high school she had an aide help her get to and from classes and help her complete her assignments. When Dixon came to UCF in 2016, she no longer needed an aide, but throughout her time here she’s used Student Accessibility Services for support.

“They helped me be as independent as possible,” Dixon says. “I still had trouble reading in the beginning and even now sometimes, so they gave me different technology, like reading software on my computer. They helped me get a notetaker and smart pen to capture what my professors were saying, a reader for tests and extra time if I needed it. It gave me the opportunity to show what I knew because I had the resources.”

Read the rest of Alex Dixon’s story at UCF Today. 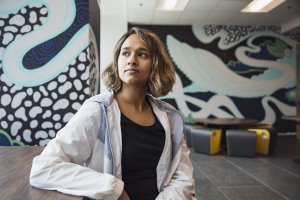 Nicole Dudenhoefer is a content producer for UCF Marketing and a 2017 journalism graduate of UCF.